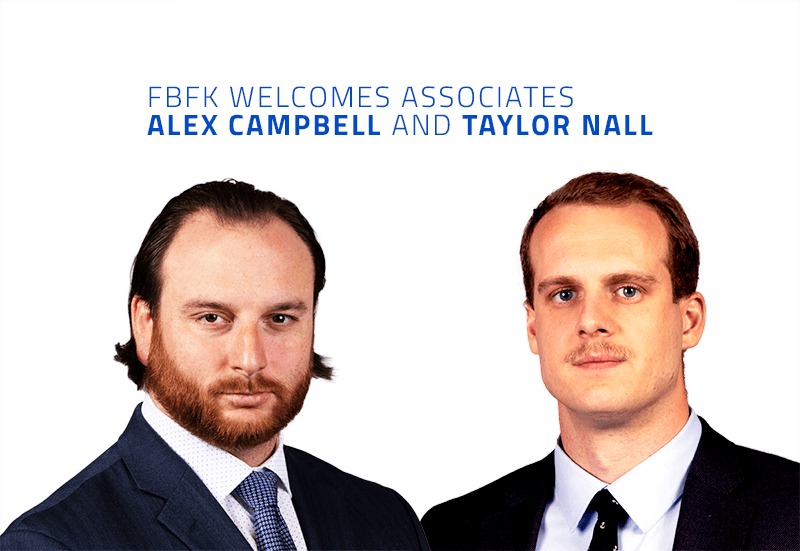 Alex Campbell was previously an attorney with Underwood Perkins, PC., and will join the commercial litigation team for FBFK. After graduating from The University of Oklahoma College of Law, Campbell moved to Washington D.C. and worked in the U.S. Department of State’s Office of Global Partnerships, which focuses on developing public-private partnerships to advance foreign policy initiatives.

“The FBFK culture and vision of the attorneys here are aligned with my personality and my career goals. It is a great group of people that I enjoy working with,” said Campbell.

In addition to practicing law, Campbell has been a certified NFL Agent since 2019. He represents professional athletes playing in the NFL. During his free time, Campbell plays rugby for the Dallas Rugby Club. He is also involved in the judiciary committee at Dallas Association for Young Lawyers.

Taylor Nall joins FBFK’s tax law team after working for KPMG in their Mergers and Acquisitions division. Nall attended University of Richmond for law school followed by Georgetown University Law Center where he obtained his LL.M. in taxation.

“I joined FBFK because I was looking for more personal relationships with clients. During law school, I clerked at a boutique tax firm. That experience made me realize that developing relationships with people and advocating on their behalf was what brought me the most satisfaction,” said Nall.

Nall also worked on The Hill for the House Judiciary Committee just after Wayfair v. South Dakota was decided in late 2018. He worked closely with big online retailers to draft legislation in response to the decision, which expanded retailers’ responsibilities to collect sales taxes on out-of-state purchases.