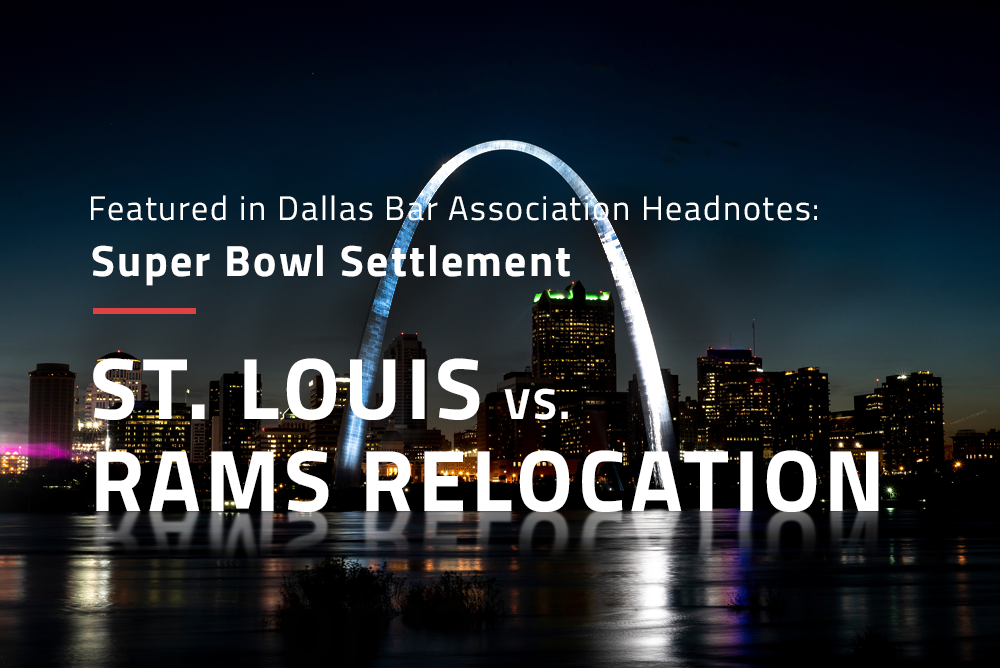 In November 2021, after a prolonged four-year legal battle, the NFL and the City of St. Louis settled their tumultuous legal battle. The case originated after St. Louis lived up to its namesake and served as the “Gateway to the West” when the NFL relocated the Rams franchise from St. Louis to Los Angeles. For the league, the move ended up costing more than just a higher cost of living and ramped up property taxes. Under the terms of the settlement, the NFL will pay the city $790 million, eliminating the need to proceed with the previously scheduled January 2022 trial.

St. Louis’ suit claimed the NFL and the Rams franchise failed to abide by the League’s own relocation guidelines and procedures when the Rams submitted its application to relocate the team to Los Angeles before the NFL’s 2016 Owners Meeting. The suit claimed St. Louis incurred millions of dollars in damages from the franchise’s departure, including loss of revenue from ticket sales, hotels, and related tax revenues. Not only did St. Louis seek damages, but also sought a disgorgement of the $550 million relocation fee paid by the Rams to the other NFL franchises, and of a portion of the increase in valuation the Rams saw through the move. By its calculations, St. Louis sought an award of over a billion dollars at trial.

Instead of proceeding to trial, the Parties agreed to settle just before the holiday season, which all sides seemed to have benefited from (including St. Louis’ attorneys, who were working under a contingent fee structure). While we will not get to see a final ruling in this matter, over the course of the past four-plus years, the case was filled with noteworthy decisions that could set a game plan for other aggrieved cities that might wish to pursue similar claims against the NFL if and when franchises opt to relocate (consider, for example, Oakland and San Diego).

First, one could say St. Louis had a significant home field advantage in the match when the Court denied the NFL’s Motion to Transfer Venue. With the suit originally filed in St. Louis Circuit Court, this ruling set the tone for the case by establishing that, should a settlement not be reached, the trier of fact would be a jury comprised entirely of St. Louis residents, the same ones aggrieved by the League’s transfer.

Furthermore, and stop me if you have heard this one before, but discovery became a contentious issue in the matter. While numerous discovery motions were adjudicated throughout the case, one particularly sensitive discovery issue surrounded the depositions of key witnesses. St. Louis sought to depose several prominent NFL franchise owners, including the Rams’ Stan Kroenke, and Dallas’ own Jerry Jones, not once but twice. While both owners were deposed initially, St. Louis sought to have them deposed again, but this time wanted to record them on video to study the “game film” should the case proceed to trial. Not only would these depositions cover topics such as the League’s decision-making process in deciding to move the Rams to Los Angeles, but would also probe into each owner’s personal finances as St. Louis worked to develop its damage model, including any punitive damages to which it may be entitled. Not only did St. Louis attempt to delve into these issues during discovery, but it inevitably would have addressed these same topics had the case gone to trial.

In September 2021, the NFL threw a Hail Mary pass by seeking to dismiss the case through Summary Judgment. The Court batted down the League’s prayer of dismissing the case, drawing no interference call, seemingly making it destined for trial. One of the NFL’s main points of contention was that the relocation guidelines relied on by St. Louis were merely self-imposed, unilateral policies that could not be considered an enforceable contract under law. The Court took a different view of this document and found not only that the relocation guidelines constituted an enforceable contract, but further insinuated by its summary judgment denial that St. Louis was likely a third-party beneficiary of these guidelines.

Despite its victories throughout the case, the representative of St. Louis ultimately found it best to take what the defense was offering them by agreeing to the terms of the settlement. Settling also avoided the proverbial “challenge flag” of an appeal after trial, which inevitably would have been thrown by the losing party, and kept this case under booth review by the Appellate Court for the foreseeable future. The Rams are not the first, and likely not the last, professional sports franchise to find a new home, and St. Louis made it closer to the goal line than its predecessors that had sought to challenge the NFL’s actions.
HN

Alex Campbell is an attorney at Ferguson Braswell Fraser
Kubasta. He can be reached at [email protected]