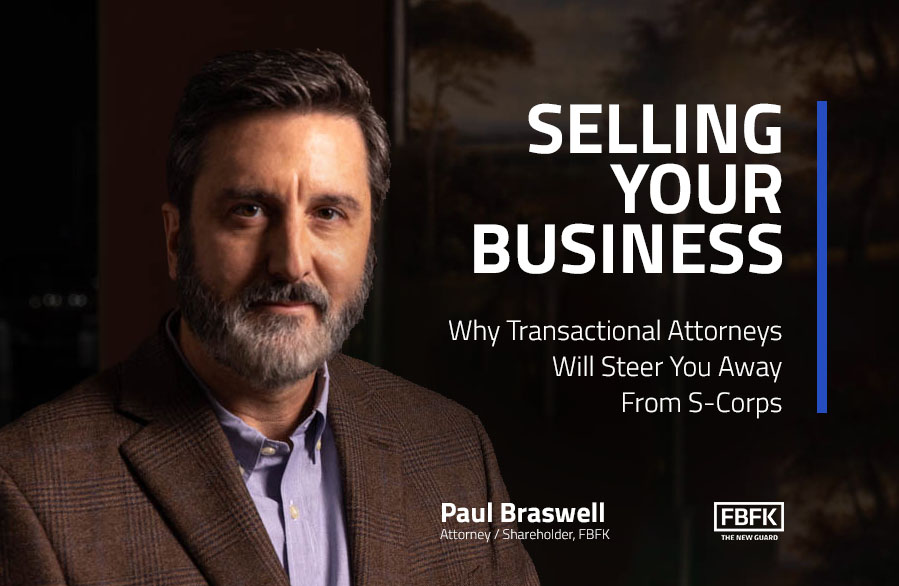 Selling Your Business: Why Transactional Attorneys Will Steer You Away From S-Corps

New mergers and acquisitions are always a hot topic during FBFK’s corporate transactional team meetings. However, shoulders start to slump, and groans are heard when the person announcing a new transaction adds the one final detail that no one wants to hear: The target is…an S-corp.

Why? S-Corps are a bit of tax smoke-and-mirrors – and it’s worth explaining why.

In short, the potential benefit of saving self-employment tax can be outweighed by having an inflexible entity structure during the operation of the business and by the complication at the time of exit.

FBFK represents buyers and sellers in almost equal proportion, and our team’s reaction happens whether we represent the buyer or the seller. If FBFK represents the seller, we know they may be required to reorganize prior to closing, costing them significant extra time before closing and extra fees. If FBFK represents the buyer, we are concerned that a restructure of the seller could delay and/or complicate the deal and that the target may not have complied with the numerous S-corp rules.

Those rules include the following things that entities taxed as S-corps cannot do:

Trying to comply with these rules provides further evidence of the axiom that “failure is easy.” In the case of S-corps, it is fairly easy to accidentally terminate the entity’s S-election. For example, many FBFK clients are using stock grants to attract and retain key employees. However, issuing incentive stock to key employees of an S-corp is a good way to break the rule about not having more than one class of stock.

Another common example of accidental revocation of S-corp status occurs with an entity that is formed as a LLC for state law purposes but makes a S-election so it is taxed as an S-corp for federal tax purposes. Clients will do that to avoid the extra maintenance requirements of a state law corporation such as keeping up with annual minutes for shareholders and directors’ meetings, etc. However, because the entity is in fact a LLC, it must have an operating agreement. Sometimes those operating agreements are written by good intentioned but non-tax savvy lawyers (or the operating agreement is purchased online) and they contain typical LLC tax provisions that are not tailored for S-corps. Those provisions alone could lead to a revocation of the entity’s S-election.

The reason terminating an entity’s status as an S-corp is important is because the consequence of having an S-election unintentionally revoked is that the IRS will treat the entity as a C-corp for federal tax purposes and subject the entity and its owners to double tax. That means the entity itself will be taxed at the corporate rate plus its owners will also have to pay taxes on any dividends they receive from the company.

The S-corp rules are not only problematic for entities looking for an exit transaction. Those same rules also make raising capital difficult, if not impossible. The single class of stock rule alone is a major hurdle. In some cases, the limit on number of shareholders is a roadblock. But maybe the biggest hurdle is the prohibition on entities being shareholders. All institutional investors, and a good percentage of sophisticated investors make investments via their LLCs or their corporations. However, if a S-corp accepts an investment from a partnership, a LLC or a corporation and admits that entity as a shareholder, it will have revoked its S-election.

The S-election can create a whole host of issues in either a sale transaction or when raising capital. Business owners with S-corporations should allow plenty of time to address the health of their business with their attorney before raising capital or actively marketing their business for sale. This will avoid lengthy delays and minimize the likelihood that the buyer backs out of the transaction entirely.