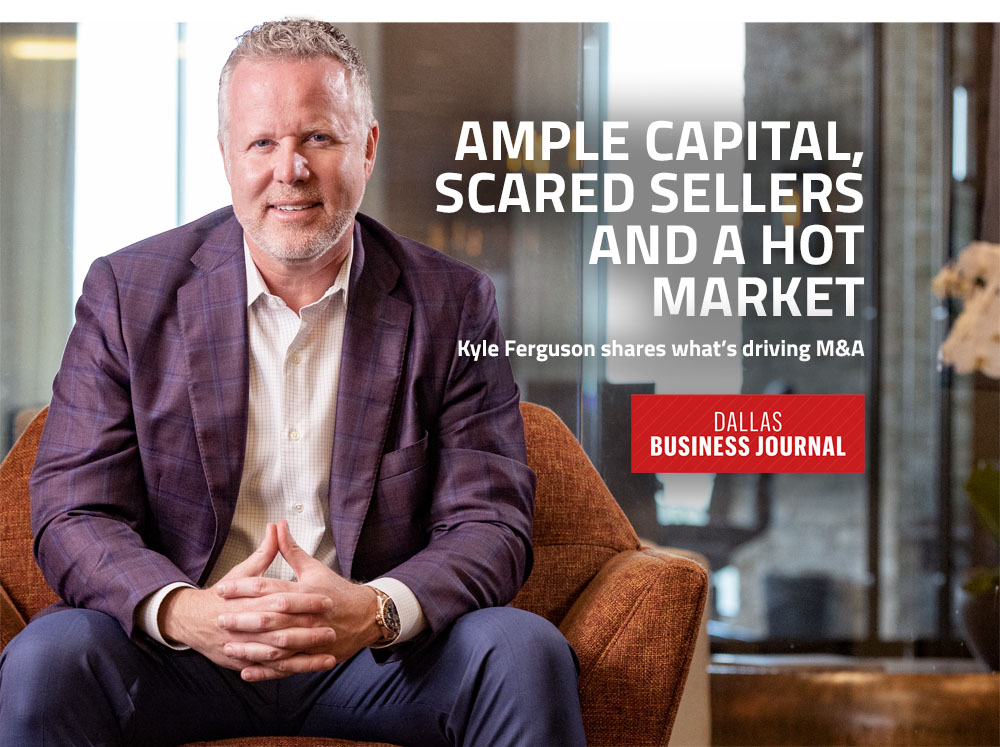 Merger and acquisition activity is on track to be as busy as it’s ever been for a local law firm, as uncertainty pushes business owners to exit and a heap of capital on the side drives buyers to make deals.

Kyle Ferguson, CEO at business law firm FBFK, said the Plano-based company is expecting a robust M&A environment following a tepid first quarter as the shakiness of the public markets stabilizes. In March, deals started filling up the attorneys’ pipelines due to business owners hungry to sell after stressful operating conditions and private equity firms and strategic buyers who have plenty of cash to deploy.

“There’s a lot of money, and there’s a run for the exits,’ Ferguson said. “It’s a fire drill. I think the fourth quarter is going to be as busy as we’ve ever seen, even with a little bit of uncertainty in the broader markets, such as inflation, interest rates and political uncertainty. What will override all of that are sellers desperate to get out…and all of this capital in these PE funds.”

The firm represents sellers in about 60% of its cases. Most FBFK’s seller clients are baby boomers who have owned and operated their businesses for decades and are looking to cash in on some or all of what they’ve built. Because buyers typically use the previous three years of financial information to judge a potential acquisition’s value, sellers have had to pull their businesses back on track after getting steamrolled by the pandemic.

“The seller, he or she is scarred from 2020,” Ferguson said. “They want out. They’re just biding their time. I’ve talked to many sellers, and all they’re trying to do is get toward the end of this year. They say, “2020 was such a disaster. I don’t want that to happen.’”

Buyers are also itching to deploy high private equity dry powder and cash on corporate balance sheets. As volatility has rippled public markets since the pandemic, Ferguson said more people are investing in private equity and alternative investments. Capital on the side is at record levels, which could also eclipse concerns of rising interest rates, the attorney added.

FBFK usually works with private equity buyers, but the firm has recently seen an increasing amount of strategic buyers — companies buying companies — as a quick strategy to increase the workforce amid hiring challenges. The uptick in strategic buyers has also pushed competition in the M&A environment, keeping valuations high.

A private equity buyer is a good option for sellers who want to stay in the business, roll in some equity and potentially keep operating their company, but if a seller wants maximum value and complete withdrawal, a strategic buyer is likely a better route.

The firm has about 50 attorneys across offices in Houston, Austin, Southern California and its Plano headquarters. North Texas is FBFK’s most active M&A market across its offices. Ferguson said that the firm’s deals team, including about 15 attorneys in North Texas, focuses on the middle market and closes about 35 deals per year. He added that FBFK has seen more interest from private equity clients in Southern California who want to do deals in Texas.

“There’s a lot of velocity and a lot of movement of money,” Ferguson said. “A (private equity client) in California who maybe did two or three deals in Texas over the last four years wants to do three to five deals in the next 18 months…We’re seeing something that few people have ever seen in our lifetimes in a single market. It’s hard to be in this market, and be in our world of M&A, and not be busy.”

Local middle-market M&A professionals said last year was one of the busiest environments they had seen. Firms closed massive funds, companies struck major agreements, dealmakers got more efficient, and DFW industry leaders said they didn’t expect it to slow down.