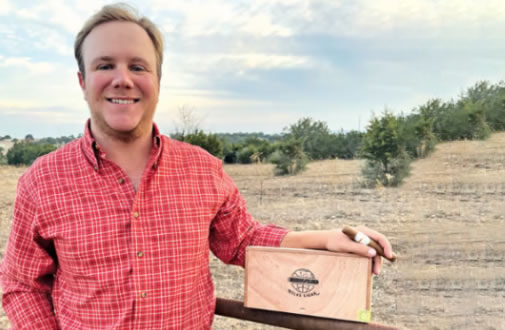 NO MARKETING, NO GIMMICKS FOR ATTORNEY JUSTIN SHELTON’S CIGAR BUSINESS

Interview by Eric Quitugua for the Texas Bar Journal

Smoking a cigar involves a certain debonaire and know-how from making a proper cut to holding it the right way to the actual puffing. It’s a symbol of sophistication (or infamy) that conjures iconic images: Winston Churchill in his Homburg hat, holding up a V sign; LeBron James sitting quietly in front of media after winning his fourth NBA championship; Tony Montana at the table as restaurant patrons prepare to say goodnight to the bad guy. But for people like corporate attorney Justin Shelton, of Ferguson Braswell Fraser Kubasta in Plano, the cigar is less icon and more science and art. Since college, Shelton has owned a cigar business, making blends of tobaccos from the lush valleys and volcanic soils of Nicaragua. Chasing flavors and dispelling myths of the ’biz are his calling in all that is tobacco.

Are you currently making cigars right now? Do you have a batch going?
So I order 10,000-15,000 at a time, and it might take me three to five years to sell all of them. But by the end of it, they’ve all been aging for a really long time. I’ll also squirrel some away for personal consumption or to give people on special occasions. What I like is that I don’t have to utilize the “aged cigar” gimmicks a lot of people do. When you hear the word “aged” on cigars, it’s often a marketing play. People say the tobacco was aged 10 years—what they really mean is there are 10 pieces of tobacco in that cigar, each of which has been aged for a year prior to being rolled. Whenever I talk about aging on my cigars, I mean after the tobacco is grown, harvested, and cured, it’s rolled and sent to me and then I age the cigar for an additional three to five years in a humidor in my house.

So you don’t do any rolling?
I don’t do the actual rolling. I know how to roll a cigar but trust me, you do not want to smoke anything that I’ve rolled. Most of what I do is on the blending side. Many people don’t realize that a cigar is made up of multiple parts. The outside is called the wrapper, which is the nicest tobacco in the cigar. The middle part is called the binder and this is what holds everything together on the inside. And then the innermost part is called the filler, which is what you would see if you turn a cigar around and look down at the end of it. Within each of those components, you have different options. The wrapper could be one thing and the binder could be a different type of tobacco, and then the filler could be any number of mixtures. All in all, you’re going to have somewhere in the neighborhood of at least six to eight different types of tobacco going into one cigar. So there’s interplay of how those flavors and tobaccos work together and burn together. It’s both a science and an art form to find what combinations work.

How does the soil impact the tobacco?
I’m no agronomist so you’re going to have to bear with my somewhat rudimentary understanding of it. But the way that the soil nutrients differ from growing region to growing region can result in significant taste differences. You can grow a seed on the island of Ometepe in Nicaragua and the tobacco will turn out sweet and rich due to the lush, volcanic soil. However, you can grow the same seed in Estelí, which is in a drier region with tougher soil, and the tobacco will be much stronger and spicier.

Do you have a favorite recipe or have one you want to try?
I have certain types of blends that I like to model the cigars after. Casa Fernandez had this wonderful Connecticut wrapper cigar that was the first one I ever had that was truly outstanding. I was inspired to try and get that type of flavor profile. My approach was the same with Maduro wrapper cigars. When I first made a Maduro, I wanted a mix between a Diamond Crown and a Viaje. No manufacturer will give away their most valuable intellectual property by telling you what exactly is in a cigar. But that’s what makes it so fun. Your biggest challenge is to figure out what’s in other people’s cigars that you like so that you can incorporate those flavors into your cigar. Let’s say there’s a very cedary, wood-like, natural flavor that I want to recreate in my blend. I will peel the wrapper leaf off part of the cigar and keep smoking it. You know that if the flavor goes away, then it was in the wrapper. If you peel the wrapper off and you can still taste that flavor, then you know it is coming from somewhere in the binder or filler.

Is it a really tough process to pull everything together? It seems like it’d be pretty easy to mess up a cigar.
It is an incredibly cutthroat business. There are more factories now than when I got into the business but not tons that will make what you want and can do it well. So you’re at the whim of whether factories have time for you, their production is at capacity, and who you know that can get you in the door. Right now my business is mostly creating custom cigars for business events, birthdays, and other important moments. Our turnaround time is two weeks. I do all the design and our printing can be done immediately once the design is approved. By keeping everything, including manufacturing, in-house, we’re able to provide custom cigar services at 40% to 50% less than everybody else. I hold on to the cigars as long as I have to and they just keep getting better and better as they age, so I’m never particularly concerned with sales volume. They will sell but if not, worst-case scenario is that I have to smoke them all myself. I don’t do any marketing. I generate most of my business through people I meet playing gold and through word of mouth, with an occassional order coming in through the website. It’s really fun and keeps growing the more people try my cigars.

Anything else you want to mention?
A lot of consumers believe the marketing side of things. So the manufacturers build up this mystique around the cigar business. One thing I like to do at my events is dispel that mystique by answering questions about the business. I always try to help people understand exactly what goes into making a cigar. It’s somewhat an art form but it’s also not rocket science. I want to be completely transparent with my customers so that they are not duped by misleading marketing, which is pervasive in the industry. TBJ