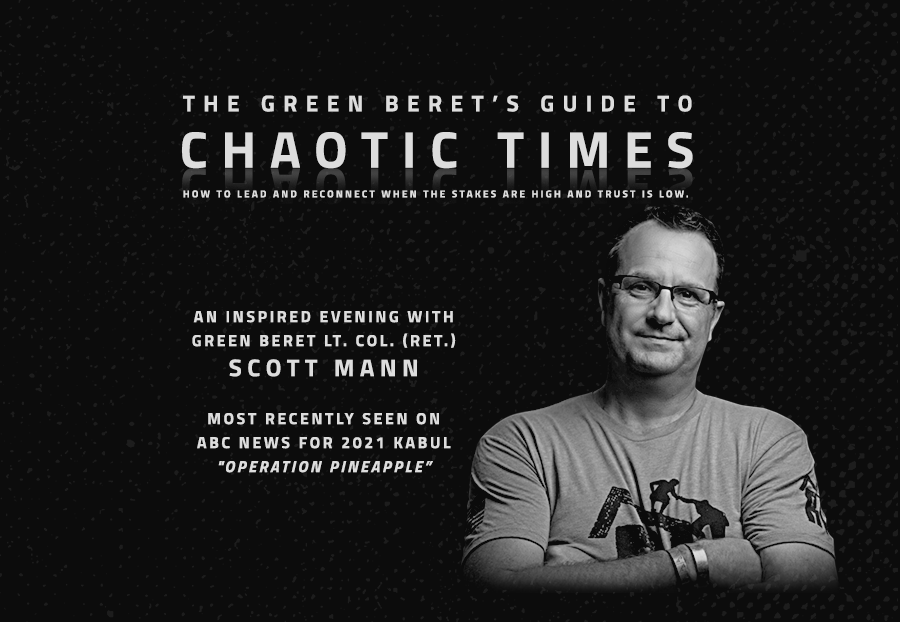 “Leaders who can get ‘below the waterline’ and connect with their teams as humans are the ones who are going to thrive post-pandemic and in chaotic times.”

This was the powerful message that famed Lt. Col. (Ret.) and Green Beret Scott Mann drove home to more than 100 executives at FBFK’s recent “Leading Through Chaos” evening event at the exclusive Park House in Dallas. He used an iceberg metaphor to illustrate that while the audience represented varied industries and organizations, in times of chaos and crisis, such as the past several pandemic years, those who are able to connect with others at their core (below the water line) – as “Meaning Seeking, Emotional, Social, Story Animals who Struggle” – will not only survive, but their companies will thrive. To watch Mann discuss the iceberg concept, here’s a short snippet from the event.

Mann, who was nationally lauded from ABC News to the Associated Press for leading the now-famed secret task force “Operation Pineapple” and that brought home more than 600 Afghan special operatives and their families from Kabul this past August, is a master at building relationships in high-stakes, competitive environments. As an 18-year Green Beret in the U.S. Army (of which he served 23 years), he specialized in unconventional, high-impact missions all over the world including Colombia, Ecuador, Peru, Panama, Iraq and Afghanistan. His secret? He was able to restore trust and create human connections in places where that didn’t seem possible. He is now bringing those same principles to corporate boardrooms and conference rooms, where trusted leadership is more valuable – and more vulnerable – than ever through his Rooftop Leadership organization.