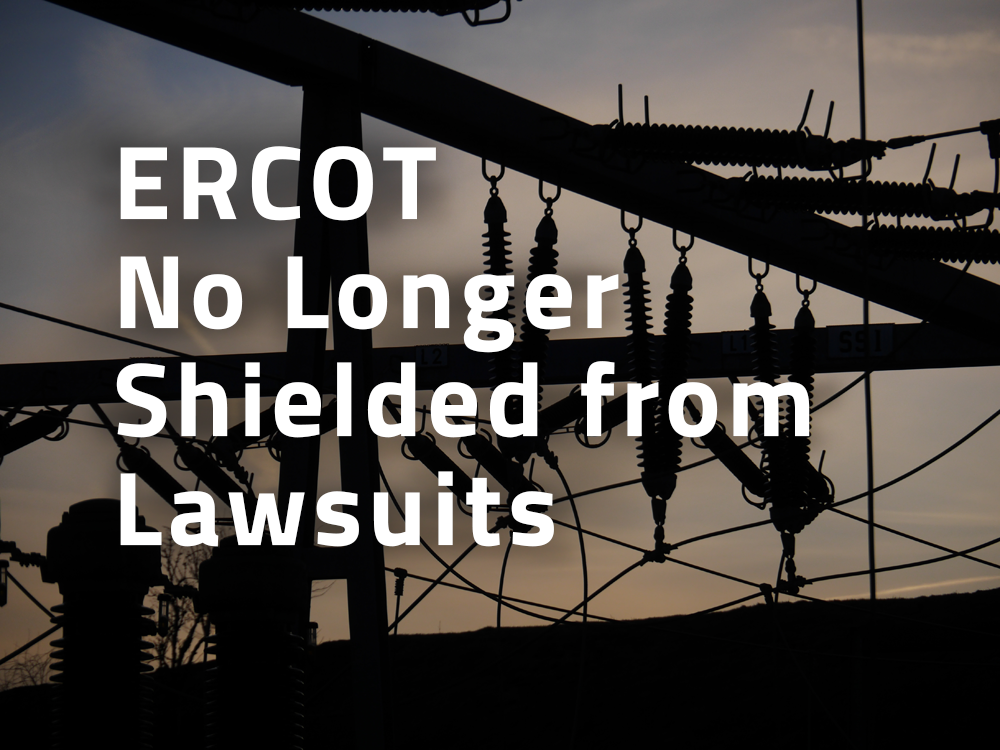 ERCOT is No Longer Shielded from Lawsuits:
A Landmark Decision

In what may be a landmark decision, last week the Dallas Court of Appeals ruled that the Electric Reliability Council of Texas (ERCOT) is not an “arm of the state,” meaning it is not entitled to governmental immunity from lawsuits.

Most Texans were blissfully unaware of ERCOT until experiencing the massive power outages caused by Winter Storm Uri in February 2021. However, ERCOT has since been in the crosshairs of the Texas legislature which passed legislation in 2021 overhauling ERCOT’s structure, and the Council is now facing a host of lawsuits resulting from the fallout of those power outages. The Dallas Court’s Feb. 23, 2022, decision is a green light for the plaintiffs in those suits to proceed.

ERCOT is an independent, non-profit organization authorized since 2001 by the Texas Public Utility Commission (PUC) to ensure the reliability and adequacy of the Texas electrical network and also ensure that buyers and sellers of electric power have access to that power grid. The Texas legislature authorized the PUC to select an “independent organization” to exercise those powers and the commission chose ERCOT. ERCOT’s members are consumers and power generators, marketers and providers, including investor-owned and municipal utilities.

In 2016, Panda Power Generation Infrastructure Fund LLC sued ERCOT for fraud and negligent misrepresentation based on ERCOT’s reports that projected a “serious and long-term scarcity of power supply.” In reliance on that forecast, Panda invested $2.2 billion in three new power plants. After Panda began construction, ERCOT reversed its earlier forecast – instead predicting an excess of generation capacity in its region.

This week, the Dallas Court – sitting en banc – reversed the 2018 panel decision and held that ERCOT is not entitled to sovereign immunity from suit and that the PUC does not have exclusive jurisdiction over Panda’s claims. The Court noted that since 2018, the Supreme Court had issued several opinions on sovereign immunity claims made by various entities authorized under state law. The Court concluded that although ERCOT is heavily regulated by the PUC, it is a “purely private entity that is not created or chartered by the government, maintains some autonomy, is operated by and overseen by its CEO and board of directors, and does not receive any tax revenue.” The Court found nothing in the authorizing legislation that would “evince a clear legislative intent to vest ERCOT with the nature, purposes, and powers of an arm of the State government” and that the Supreme Court “has not extended sovereign immunity to a purely private entity neither chartered nor created by the State.” Although ERCOT is “heavily regulated” the Court refused to find that such regulations “confer governmental-entity status.”

The Court likewise found that the 2021 legislative overhaul of ERCOT did nothing to entitle it to sovereign immunity. The Court also rejected ERCOT’s alternative argument that the PUC’s heavy regulation of its activities established that the PUC would have exclusive jurisdiction to determine any claims against it.

It is expected that ERCOT will seek review in the Texas Supreme Court. Until then, the Dallas Court’s opinion stands as a major blow to the ability of a variety of quasi-governmental entities to claim immunity from suit.